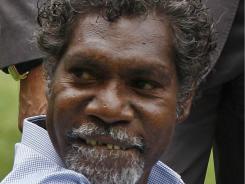 I’m saddened to hear the news that actor David Ngoombujarra (44) has died.

Ngoombujarra was one of Australia’s most well known Aboriginal actors. He had great screen presence, with his work being recognised by the AFI (Australian Film Institute) three times. He won AFI awards for his roles in Blackfellas, Black and White, and The Circuit. Ngoombujarra’s impressive body of work also included the films Rabbit Proof Fence, Ned Kelly, and Australia.

He will be missed by many within and outside of the film industry. Upon hearing the sad news Hugh Jackman tweeted: “So saddened to hear about the passing of David Ngoombujarra Starr. An extraordinary man, actor, and friend. His laugh, warmth and humanity will live on with all who knew him,”

Below is the trailer for BLACK AND WHITE