Posted on February 9, 2012 by The Bellissimo Files 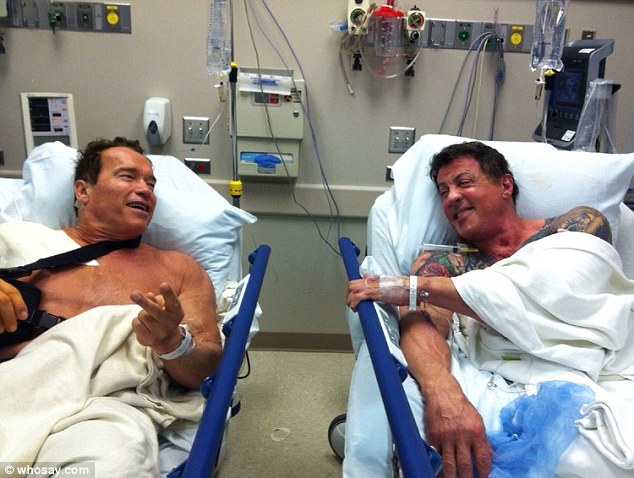 Arnold Schwarzenneger and Sylvester Stallone are well used to bumping into each other on big action movie sets but I’d say sharing a hospital room is probably a first for them.

Yesterday,  Schwarzenegger tweeted (@schwarzenegger) a pic of his new hospital buddy and said “After all the action, stunts & physical abuse shooting The Expendables 2 and The Last Stand, it was time for a little tune up on my shoulder. Look who was coincidentally waiting in line behind me for his shoulder surgery. Now we’re ready for another round of great times and action when we shoot The Tomb. #greattobeback”

I wonder if there was a 2 for 1 deal going on action men tune ups in Hollywood?

Whatever the reason for the same day operation, it looks like these guys are not going to let a little surgery stand in their way. Apparently, after the tune up, they will still have a lot of action left in them!

According to imdb, Stallone and Schwazenneger star in Mikael Hafstrom’s The Tomb It is yet unclear what role Schwarzenegger will be playing but Stallone will stars as Ray Breslin. A man “who is the world’s foremost authority on structural security. After analyzing every high security prison and learning a vast array of survival skills so he can design escape-proof prisons, his skills are put to the test. He’s framed and incarcerated in a master prison he designed himself. He needs to escape and find the person who put him behind bars.”

The film is scheduled for release in 2013.

However, you don’t have to wait until 2013 to see these action men share the screen, later this year you’ll be able to see them both (as well as Bruce Willis and a bunch of other 80s action men) in The Expendables 2.

Hi, I’m Sarina Bellissimo and this is the place I come to indulge in my love of all things entertainment. I can’t remember a time when I wasn’t fascinated by all things Hollywood/showbiz. I blame my parents! As a child my mum used to force me to watch old Elvis Presley films with her, and both my mum & dad would take my brothers and I to the Drive-In to watch the latest films (this is where my love for ROCKY began!). When not watching movies, I was trying to figure out ways to pull the back off the TV so I could somehow get into it and be a part of all the action on the screen! This blog isn’t a place that revels in gossip and negativity. It’s a place where entertainment is celebrated. That said, this is a place you can turn to for honesty. Honesty and criticism don’t always mean attacks. I choose to criticise the piece of work but not the person and I acknowledge that just because I don’t like something, it doesn’t mean someone else won’t. Here you’ll find interviews with some of the biggest names in the world of Entertainment, reviews, breaking news and my very own musings. Away from The Bellissimo Files, you can find me on Spin 1038 on Saturdays, between 1pm and 3pm,presenting Plan B. There’s celebrity interviews, entertainment news, the low down on the must see movies and music releases of the week, the ultimate guide to what’s on where in the city, as well as masterclasses with experts on standby to answer listeners’ questions. I also appear on TV3’s “Elaine” panel, talk movies on “Ireland AM” and you can sometimes hear me filling in on Moncrieff’s “Movies and Booze “(Newstalk) The Bellissimo Files is constantly evolving. Files (topics) will be added or deleted as time goes on. Feel free to read, watch, comment, share, and make suggestions for what you would like to see on the site. Sarina
View all posts by The Bellissimo Files →
This entry was posted in Movie News and tagged Arnold Schwarzenneger, Sarina Bellissimo, Sylvester Stallone. Bookmark the permalink.