Posted on October 3, 2012 by The Bellissimo Files 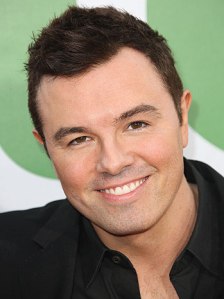 Seth McFarlane has been named as the host of the 85th Academy Awards.

MacFarlane is best known as creator (and voice of many of the characters) of Family Guy, American Dad, and The Cleveland Show. In 2012, he made the move to the movies by bringing the talking teddy bear, Ted, to the big screen.

Amazingly, MacFarlane has never been to the Oscars. He has watched many of them though, and knows what type of host he wants to be. He told EW.com, “when it comes to hosting the Oscars he wanted to stay “true to the classy Bob Hope-esque tone.”

He also told EW.com that his favorite Oscar host of all time,  “to me, it’s hands down Johnny Carson,”  His favorite host since 1995? Billy Crystal, nine-time host and a fill-in this year for Eddie Murphy, who dropped out after Brett Ratner resigned from his role as the telecast’s producer after making homophobic comments.”

I love MacFarlane’s work and hope he is able to bring his sense of humour and entertainment to the Oscars because it is in dire need of an injection of fun!

It looks like he has started on the right foot, check out MacFarlane’s Oscar announcement:

So the host has been announced, as has the date (24th February, 2013), all that’s left to do is announce the nominees. That announcement will happen on 10 January, 2013.

Hi, I’m Sarina Bellissimo and this is the place I come to indulge in my love of all things entertainment. I can’t remember a time when I wasn’t fascinated by all things Hollywood/showbiz. I blame my parents! As a child my mum used to force me to watch old Elvis Presley films with her, and both my mum & dad would take my brothers and I to the Drive-In to watch the latest films (this is where my love for ROCKY began!). When not watching movies, I was trying to figure out ways to pull the back off the TV so I could somehow get into it and be a part of all the action on the screen! This blog isn’t a place that revels in gossip and negativity. It’s a place where entertainment is celebrated. That said, this is a place you can turn to for honesty. Honesty and criticism don’t always mean attacks. I choose to criticise the piece of work but not the person and I acknowledge that just because I don’t like something, it doesn’t mean someone else won’t. Here you’ll find interviews with some of the biggest names in the world of Entertainment, reviews, breaking news and my very own musings. Away from The Bellissimo Files, you can find me on Spin 1038 on Saturdays, between 1pm and 3pm,presenting Plan B. There’s celebrity interviews, entertainment news, the low down on the must see movies and music releases of the week, the ultimate guide to what’s on where in the city, as well as masterclasses with experts on standby to answer listeners’ questions. I also appear on TV3’s “Elaine” panel, talk movies on “Ireland AM” and you can sometimes hear me filling in on Moncrieff’s “Movies and Booze “(Newstalk) The Bellissimo Files is constantly evolving. Files (topics) will be added or deleted as time goes on. Feel free to read, watch, comment, share, and make suggestions for what you would like to see on the site. Sarina
View all posts by The Bellissimo Files →
This entry was posted in Movie News and tagged 85th Academy Awards, Academy Awards, Oscars, Sarina Bellissimo, Seth MacFarlane, The Bellissimo Files. Bookmark the permalink.