Posted on October 16, 2012 by The Bellissimo Files 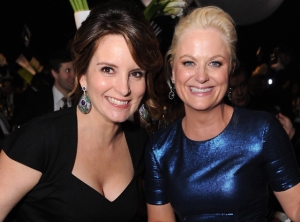 The 2013 Golden Globes are set to get sassy, smart and funny, with the announcement that two of Hollywood’s funniest ladies will host the awards.

Tina Fey and Amy Poehler will take over hosting duties from Ricky Gervais at the 70th Golden Globes – making this the first time a female duo host the Golden Globes.

Fey and Poehler have a natural, hilarious, smart, and most importantly, entertaining chemistry.

They have had a long working relationship, working together on television, on Saturday Night Live, and film (Mean Girls and Baby Mama). They have even presented together at awards ceremonys. Here they are presenting at the 2008 Emmy Awards ceremony

According to thehollywoodreporter.com, Paul Telegdy, president of alternative and late-night programming for NBC Entertainment, said in a statement, “Having both Tina Fey and Amy Poehler on board to host this year’s festivities is a major coup. Tina and Amy have a proven chemistry and comedic timing from their many years together on SNL to their successful co-starring roles in Baby Mama.”

What I love about Fey and Poehler is that they can be funny without being mean. Take Poehler’s idea for the Beauty Pageant send up at the 2011 Emmy’s (which Fey was a ‘contestant’/nominee in) and her participation in Julia Louis Dreyfus’ acceptance speech at this year’s Emmys.

With Fey and Poehler at the helm, I for one, can’t wait for next year’s Golden Globes!

The Golden Globes kick off the 2013 award season on January 13 (live from the Beverly Hilton).

Hi, I’m Sarina Bellissimo and this is the place I come to indulge in my love of all things entertainment. I can’t remember a time when I wasn’t fascinated by all things Hollywood/showbiz. I blame my parents! As a child my mum used to force me to watch old Elvis Presley films with her, and both my mum & dad would take my brothers and I to the Drive-In to watch the latest films (this is where my love for ROCKY began!). When not watching movies, I was trying to figure out ways to pull the back off the TV so I could somehow get into it and be a part of all the action on the screen! This blog isn’t a place that revels in gossip and negativity. It’s a place where entertainment is celebrated. That said, this is a place you can turn to for honesty. Honesty and criticism don’t always mean attacks. I choose to criticise the piece of work but not the person and I acknowledge that just because I don’t like something, it doesn’t mean someone else won’t. Here you’ll find interviews with some of the biggest names in the world of Entertainment, reviews, breaking news and my very own musings. Away from The Bellissimo Files, you can find me on Spin 1038 on Saturdays, between 1pm and 3pm,presenting Plan B. There’s celebrity interviews, entertainment news, the low down on the must see movies and music releases of the week, the ultimate guide to what’s on where in the city, as well as masterclasses with experts on standby to answer listeners’ questions. I also appear on TV3’s “Elaine” panel, talk movies on “Ireland AM” and you can sometimes hear me filling in on Moncrieff’s “Movies and Booze “(Newstalk) The Bellissimo Files is constantly evolving. Files (topics) will be added or deleted as time goes on. Feel free to read, watch, comment, share, and make suggestions for what you would like to see on the site. Sarina
View all posts by The Bellissimo Files →
This entry was posted in Movie News, TV News and tagged 2013 Golden Globes, 70th Golden Globes, Amy Peohler, Sarina Bellissimo, The Bellissimo Files, Tina Fey. Bookmark the permalink.