Posted on February 1, 2013 by The Bellissimo Files

This week saw the release of the first pics of Ashton Kutcher, as Apple founder, Steve Jobs, in the biopic Jobs.

The film was screened at The Sundance Film Festival, where it was well received.

Kutcher told the Associated Press,  “This was honestly one of the most terrifying things I’ve ever tried to do in my life. I admired this man so much. …I’ve never seen Abraham Lincoln walk into a room, but I’ve seen Steve Jobs walk into a room.”

On 26 Jan, Kutcher tweeted (@aplusk), “Thank you Sundance for your support of Jobs” and attached the photo below – showing just how much he actually transformed into Steve Jobs (it’s hard to tell the men apart – Kutcher is the one on the left!)

So today’s Flashback Friday is all about Ashton Kutcher before he was Steve Jobs. This takes us back to April 2008 when he was hooking up Cameron Diaz in What Happens in Vegas. I got to have a fun chat with himself and his co-star Rob Corddry about the film their Irish ancestry, partying in Vegas, and acting while drunk (and ended up on his lap for a photo at the end of the interview). 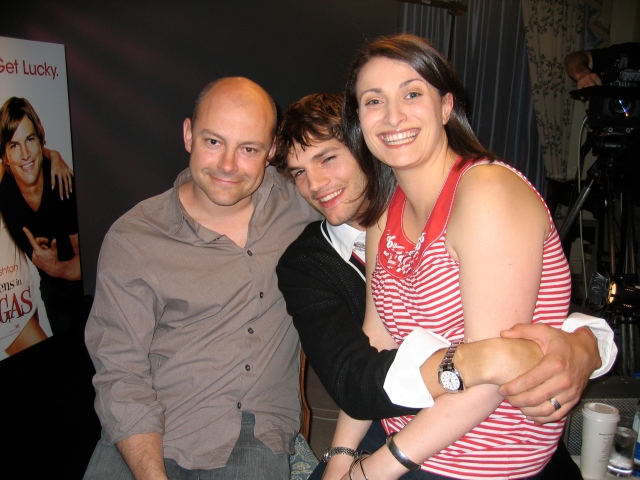 Hi, I’m Sarina Bellissimo and this is the place I come to indulge in my love of all things entertainment. I can’t remember a time when I wasn’t fascinated by all things Hollywood/showbiz. I blame my parents! As a child my mum used to force me to watch old Elvis Presley films with her, and both my mum & dad would take my brothers and I to the Drive-In to watch the latest films (this is where my love for ROCKY began!). When not watching movies, I was trying to figure out ways to pull the back off the TV so I could somehow get into it and be a part of all the action on the screen! This blog isn’t a place that revels in gossip and negativity. It’s a place where entertainment is celebrated. That said, this is a place you can turn to for honesty. Honesty and criticism don’t always mean attacks. I choose to criticise the piece of work but not the person and I acknowledge that just because I don’t like something, it doesn’t mean someone else won’t. Here you’ll find interviews with some of the biggest names in the world of Entertainment, reviews, breaking news and my very own musings. Away from The Bellissimo Files, you can find me on Spin 1038 on Saturdays, between 1pm and 3pm,presenting Plan B. There’s celebrity interviews, entertainment news, the low down on the must see movies and music releases of the week, the ultimate guide to what’s on where in the city, as well as masterclasses with experts on standby to answer listeners’ questions. I also appear on TV3’s “Elaine” panel, talk movies on “Ireland AM” and you can sometimes hear me filling in on Moncrieff’s “Movies and Booze “(Newstalk) The Bellissimo Files is constantly evolving. Files (topics) will be added or deleted as time goes on. Feel free to read, watch, comment, share, and make suggestions for what you would like to see on the site. Sarina
View all posts by The Bellissimo Files →
This entry was posted in Interviews, Movie News and tagged Apple, Ashton Kutcher, Cameron Diaz, Jobs, Rob Corddry, Sarina Bellissimo, Steve Jobs, The Bellissimo Files, What Happens in Vegas. Bookmark the permalink.