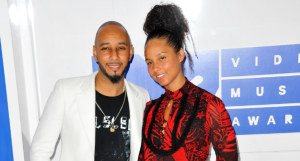 Alicia & Swizz at this year’s VMAs

There are so many things to get angry about in this world; there are so many atrocities; situations that are scary to think about but need to be shouted about; however, what are some people in the world really upset about at the moment? The fact that Alicia Keys chose to not wear makeup to Sunday night’s MTV VMAs. Yes, you read right, many people are upset about what Alicia Keys decided to do to her very own face!

Today, People magazine had a piece, online, under the headline, “Alicia Keys’ Husband Swizz Beatz Defends Her Makeup-Free VMAs Look”. Swizz Defends a Make-Up Free Look? What? Since when was wearing no make up a crime against humanity? Since when was this something that needed defending? Since when did we become such a fucked up, superficial world?

As summarised succinctly on Lena Dunham’s Lenny Letter, “Alicia Keys is a 15-time Grammy® Award-winning singer/songwriter/producer, an accomplished actress, a New York Times best-selling author, an entrepreneur and a powerful force in the world of activism”. With all of those accomplishments, some people still choose to define Alicia by what she does or doesn’t wear on her face!

Not that Alicia has to explain her decision, but back in May she wrote a great piece for Lenny Letter, Alicia Keys: Time to Uncover. In this piece she wrote about why she has chosen not to wear make up. I’m not going to diminish this by trying to put her thoughts into one or two sentences – I’ll let you read it yourself.

After Sunday night’s criticisms, Alicia posted this great statement on twitter, along with a photo of herself.

Y'all, me choosing to be makeup free doesn't mean I'm anti-makeup. Do you! 😘😘 pic.twitter.com/Mg0Ug9YA9q

She is right. Do you! If your you is different to someone else that’s a good thing. If someone is choosing to do something that you are not, it does not mean that they are wrong, or that they are passing judgement on your choices or who you are as an individual. Carbon copies do not make for an interesting world. A world of uniqueness and differences is exciting and wonderful.

I love what Swizz said about all of this ridiculousness on an Instagram video (Sidenote – Alicia didn’t need Swizz to defend her, he was just saying what most of us were thinking!)

“This is deep. Somebody sitting home mad because somebody didn’t wear makeup on their face. Not your face, but they didn’t put makeup on their face because they just didn’t feel like wearing makeup. But you mad because that person didn’t put on makeup to please you? Type of shit is this? ‘Cause you can do whatever you wanna do … She didn’t want to put make up on her face and you mad. You must be mad at a lot of shit. You better look in that mirror and get that ass fixed. Because if you mad at somebody else for not putting make up on their face, and it’s their decision, you got a lot of work to do in life, and we all do, but you sure do!”

I wish there was a way we could just press Ctrl + Alt + Del on the world because it really is time to reboot!

Hi, I’m Sarina Bellissimo and this is the place I come to indulge in my love of all things entertainment. I can’t remember a time when I wasn’t fascinated by all things Hollywood/showbiz. I blame my parents! As a child my mum used to force me to watch old Elvis Presley films with her, and both my mum & dad would take my brothers and I to the Drive-In to watch the latest films (this is where my love for ROCKY began!). When not watching movies, I was trying to figure out ways to pull the back off the TV so I could somehow get into it and be a part of all the action on the screen! This blog isn’t a place that revels in gossip and negativity. It’s a place where entertainment is celebrated. That said, this is a place you can turn to for honesty. Honesty and criticism don’t always mean attacks. I choose to criticise the piece of work but not the person and I acknowledge that just because I don’t like something, it doesn’t mean someone else won’t. Here you’ll find interviews with some of the biggest names in the world of Entertainment, reviews, breaking news and my very own musings. Away from The Bellissimo Files, you can find me on Spin 1038 on Saturdays, between 1pm and 3pm,presenting Plan B. There’s celebrity interviews, entertainment news, the low down on the must see movies and music releases of the week, the ultimate guide to what’s on where in the city, as well as masterclasses with experts on standby to answer listeners’ questions. I also appear on TV3’s “Elaine” panel, talk movies on “Ireland AM” and you can sometimes hear me filling in on Moncrieff’s “Movies and Booze “(Newstalk) The Bellissimo Files is constantly evolving. Files (topics) will be added or deleted as time goes on. Feel free to read, watch, comment, share, and make suggestions for what you would like to see on the site. Sarina
View all posts by The Bellissimo Files →
This entry was posted in Opinion Piece and tagged Alicia Keys, Can we just press Ctrl + Alt + Del?, MTV VMAS 2016, No make up, Sarina Bellissimo, Swiss Beatz, The Bellissimo Files. Bookmark the permalink.