Back to School – All Is Different But Still The Same

Posted on September 1, 2020 by The Bellissimo Files

There was such excitement this morning. The day our household has been counting down to was finally here!

After just over 6 months in just our care – the 9 and the 4 year old were taking their first steps back into their own world.

First Day of 4th Class
The 9 year old couldn’t wait to run, from her dad and I, towards her friends and school. Instead of me giving her some advice, she had just one instruction for me, “Please don’t embarrass me mum.” She gave me a hug and then ran off confidently and happily to the line that would take her into the place she had been missing so much – her school.

She took all the  new regulations in her stride because these meant she got to go back to her world. One where she is independent of her mum, dad and little brother.

One, that even if it’s different to what she left six months ago, is still so comforting, safe and allows her to grow as the individual she wants to be.

One, where even with all the restrictions in place, she can play freely; be with her friends, and interact with other adults (teachers and principal) who welcomed her back with open arms. Even if those arms couldn’t be touched, their warmth and safety could be felt. 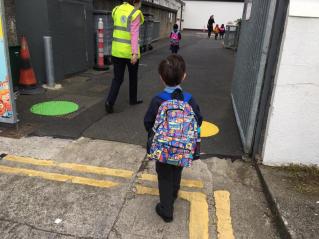 First Ever Day Of School
My Junior Infant on the other hand, as excited as he was, was happy to not let go for alittle while longer.

His excitement soon turned to pensiveness as he waited in line for his turn to enter this world. He was taking it all in and no doubt the realisation that he was about to enter a new world, where mum and dad would not be as accessible as we had been in the last while, was starting to sink in.

We got extra hugs and our hands were squeezed tighter as we started to move to the top of the line.

When his turn finally came, he became sheepish and started to look a little lost as he took his first steps into the unknown all on his own. My husband and I may not have been able to comfort him, but a teacher immediately stepped in to try and ease the nerves and show him the way.

It was so hard to stand back and watch him be overwhelmed by the situation but it was a great lesson for the three of us.

There are going to be moments in his life where he is going to have to take those steps knowing that we can’t follow, and someone else may have to step in. Hopefully he will know that we will always be cheering him on and have his back, and more often than not he will be OK.

He will find a way to use the resilience, he has built up as a result of this pandemic, to get him through.

Hopefully he will also know that resilience isn’t always a requirement, here’s to him allowing himself to be vulnerable; to letting others in; being kind; taking chances; and enjoying the adventure that is ahead of him.

To paraphrase Dr Seuss, “Today is his (and her) day. He (and obviously she) is off to Great Places. He (and she) is off and away!”

Hi, I’m Sarina Bellissimo and this is the place I come to indulge in my love of all things entertainment. I can’t remember a time when I wasn’t fascinated by all things Hollywood/showbiz. I blame my parents! As a child my mum used to force me to watch old Elvis Presley films with her, and both my mum & dad would take my brothers and I to the Drive-In to watch the latest films (this is where my love for ROCKY began!). When not watching movies, I was trying to figure out ways to pull the back off the TV so I could somehow get into it and be a part of all the action on the screen! This blog isn’t a place that revels in gossip and negativity. It’s a place where entertainment is celebrated. That said, this is a place you can turn to for honesty. Honesty and criticism don’t always mean attacks. I choose to criticise the piece of work but not the person and I acknowledge that just because I don’t like something, it doesn’t mean someone else won’t. Here you’ll find interviews with some of the biggest names in the world of Entertainment, reviews, breaking news and my very own musings. Away from The Bellissimo Files, you can find me on Spin 1038 on Saturdays, between 1pm and 3pm,presenting Plan B. There’s celebrity interviews, entertainment news, the low down on the must see movies and music releases of the week, the ultimate guide to what’s on where in the city, as well as masterclasses with experts on standby to answer listeners’ questions. I also appear on TV3’s “Elaine” panel, talk movies on “Ireland AM” and you can sometimes hear me filling in on Moncrieff’s “Movies and Booze “(Newstalk) The Bellissimo Files is constantly evolving. Files (topics) will be added or deleted as time goes on. Feel free to read, watch, comment, share, and make suggestions for what you would like to see on the site. Sarina
View all posts by The Bellissimo Files →
This entry was posted in Opinion Piece and tagged Back to school, First Day of School, Sarina Bellissimo, The Bellissimo Files. Bookmark the permalink.